Previously, I discussed Weston Price and his work with native groups around the world and what he found. I mentioned that around that same time, one of the first soil scientists by the name of William Albrecht was coming to similar conclusions back in the states.

Dr. Albrecht worked frequently with beef and dairy ranchers to try to figure out why birth rates were falling and why healthy cattle were seemingly disappearing. He found that the cows already instinctively knew what was wrong - the soil under them was becoming depleted, starving them of the vitamins and minerals which they needed to survive and reproduce in a healthy fashion. Over many experiments, he found that cattle could tell the difference between plants grown on soil that had been fertilized and plants grown on depleted soil, and showed a clear preference for the former.

As it is today, the only mineral nutrients which were considered important for plant growth in his time were Nitrogen, Phosphorous and Potassium. Lime (calcium) was only considered as useful to raise the soil pH, and not as a nutrient in and of itself, and magnesium (as dolomite) was only valued because it raised pH more than regular lime. Even beyond that, it's now common knowledge that animals require a much greater diversity of minerals in order to be healthy. Cobalt, selenium, iron, copper, manganese, and so on can be found today in multivitamins in recognition of that fact, and yet even today farmers do not add these things to their soils. In fact, they take the same attitude even towards lime that they did in the 30s.

In his work, Dr. Albrecht often looked at data for various diseases correlated to regions in the US. He found that in the midwest, where moderate precipitation and glacial till had allowed soil fertility to build to a high degree, all diseases were found at lower rates compared to the rest of the country. Dental caries, cancer, heart disease and so on were all reduced in the areas where the soil had a high mineral content, and much higher on the humid east coast where the soils have been leached completely.

Back then he was complaining that exploitative farming techniques had caused reduced the mineral content of the midwestern soils by around 50% compared to 50 years prior. Today, even the USDA admits that since the 1950s the mineral contents of food produced in the US have fallen in half yet again. This bodes poorly for our health.

Besides mineral nutrients, Dr. Albrecht also made some important observations regarding soil humus. He noted that plants grew significantly better in humus than they did from sterile, chemical nitrogen fertilizer. Further experiments revealed that plants will utilize fully formed amino acids and proteins from the soil whenever possible, and from humus often partly formed amino acids. These forms require far less energy to convert into protein than does manufacturing it from nitrates, since the work is already "half done". He did several experiments involving cats and pasteurized vs raw milk, and found that not only did the pasteurized milk cause sterility in the cats, but the proteins in the milk passed through virtually unchanged. Weeds did not grow in the poo from the cats fed pasteurized milk, but grew without encouragement from the poo of the wholemilk group. When peas were grown on the pasteurized poo, they not only grew different in form, but they also took on the flavor of the poo, demonstrating that not only couldn't microbes break down the denatured proteins, but the plants absorbed them completely (or at least mostly) unmodified. 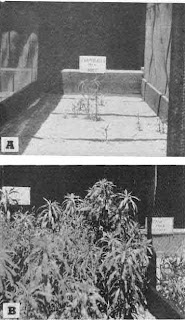 Dr. Albrecht recognized the problems inherent in removing all crop residues from the field post harvest. Back then, as today, it was customary to sell the residues (particularly of corn) as silage for cattle. He noted that the loss of topsoil resulting from selling residues and repeated tillage had greatly reduced the ability of the soils to hold water, and to provide adequate nitrogen in available forms.

Likewise, animals cannot use minerals in their mineral forms. We require them combined into proteins: thiamine with sulfur, vitamin B12 for cobalt, and so on. We, and other animals, can't simply eat minerals off a salt block and derive benefit from them. In that respect cows have more capability, but it is still to their disadvantage compared to plant-processed forms.

One other thing that was notable about Dr. Albrecht is that he was probably the first person to recognize the importance of microbes in plant growth and health. It wasn't until about 30 years later that scientists began experimenting with mycorrhiza and plant growth promoting bacteria. Today we know that they can dramatically improve plant growth and yield, as well as nutrient content, disease and drought resistance.  In many poorer countries they are used instead of chemical fertilizer with good results.

Obviously, it is in our interest both to mineralize our soils and to grow our food in such a way as to maximize the mineral content, and soil retention of minerals. I'll be discussing these techniques further in future articles, and also discuss some of what does not work.